In recent weeks Cindy Marina, senior setter on Forza1 18-1s, was invited to play with the Albanian National Team. Cindy is the daughter of Forza1 owners Ardian and Kristina Marina who are both natives of Albania. This is a tremendous honor for Cindy as she will practice and compete with the National team starting May 18th. They will compete in two international tournaments and get to play against power house teams like Poland.

Cindy has been setting since she was 9 years old and has accomplished a lot as a youth player. In 2015, she helped Great Oak reach  its 3rd consecutive semi-finals in CIF and she was named MVP of the Southwestern League. She was also nominated for Gatorade Player of the Year.  In 2015, she led Forza1 17-1s to a 13th place at Open USA Nationals and her 18-1s is currently ranked 16th in Southern California.  Forza1 18-1s will be going to AAU Nationals in Florida in late June and Cindy will return to play with her team. 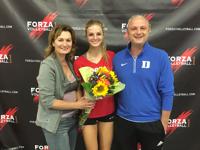 Cindy is a talented setter with quick hands and graceful movement. She is a solid all around player who jumps well and blocks and attacks from the front line. She will be attending Duke University in the fall of 2016 and is expected to be an impact player for their program. She will join other local standouts, who also played for Coach Dana Burkholder, junior middle blocker Alyse Whitaker and sophomore outside hitter Cadie Bate. It’s going to be a busy summer of volleyball for Cindy and we wish her all the best in her training and competitions!