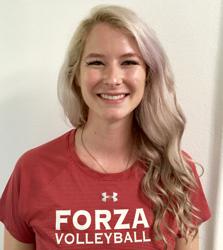 Tiffany Johnstone began her volleyball career at Ontario High School in Ontario, CA. She was the starting Varsity setter for 3 years, and captain for her junior and senior year. Johnstone earned Mt. Baldy League MVP two years in a row and led her team to two back-to-back undefeated league championships. She also played Water Polo, earning 1st Team All-League her first year, as well as Track & Field where she competed in the high-jump. In addition to high school sports, Johnstone played club volleyball for Yucaipa VBC, Top Gun, and ClubWest.

Following her career at the University of La Verne, Johnstone returned to the Southern California Intercollegiate Athletic Conference (SCIAC) as a graduate assistant coach for the University of Redlands volleyball program in the summer of 2014. In addition to her role as a graduate assistant, she also stepped up as the interim Head Coach at Redlands while the University transitioned coaches. Aside from coaching at Redlands, Johnstone earned her Master of Arts in Higher Education through the School of Education in 2017. She later went on to earn her Single Subject Teaching Credential in Biology, in 2018. Prior to joining the Bulldog coaching staff, Johnstone served as the head coach of the junior varsity volleyball team while acting as an assistant coach for the varsity program at Ontario High School. She also gained experience as a coach at the NBC Summer Volleyball Camps at Western Christian High School, and as an assistant coach for Citrus Community College and at ClubWest Volleyball Club.

Johnstone taught Integrated Science at King Middle School in San Bernardino prior to her current teaching position. She is now teaching Biology and Anatomy at Heritage High School, where she is also the Head Volleyball coach for the Girls and Boys teams. In 2018, her first season with the Patriots, the Girls’ team went undefeated in league and earned the League Champion title. This is the first League title in Heritage High School history. The Girl’s team later went on to the Quarter Finals in CIF, this past season.

Besides her love for the sport, Johnstone enjoys teaching and coaching in order to help others succeed and not only become better student-athletes, but also better people.