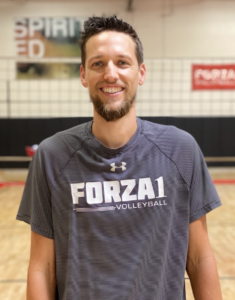 Jason has been coaching volleyball for 12  years. In 2018/2019 Jason led the 12UA and 13UA team to a 2nd place finish at AAU Nationals. Both teams earned silver medals. He also was Dana Burkholder’s assistant on the 18UA team that finished 1st place in SCVA!
In 2017/2018 Jason led the 12UA team to a 5th place raking in SCVA! In  2016, Jason lead his 15-2 National team to a winning season in the Gold Division finishing top 34 in SCVA and taking 5th at Festival in Arizona.  Also in 2016, Jason was the assistant coach under Landi Koja on the 16-1s that finished 3rd at Junior Nationals in the National Division. In 2017, Jason was the 12UA Head Coach and the 15 & 18 National Head Coach. Jason is a very technical coach and regardless of which age or level he is working with he helps players grow their game and understand how to be more effective with their skill set.

Since 2007, Jason has coached at every age group and level either as an assistant or head coach and brings an enthusiasm to the game that is infectious. His desire to grow the sport also extends to boys volleyball and in 2015 he helped start the boys program at Forza1 as well as the boys middle school league.

Jason coached for four years at Chaparral High School as an assistant on varsity as well as the head coach on JV. At Chaparral, Jason learned under the direction of Pat Manning and helped to build a successful program there.

Jason has also been the assistant director of the Middle school league for the past 6 years, providing the technical training for the leagues teams.

Jason discovered volleyball at the age of 18 and within less than 6 months was playing and coaching on a daily basis. For the past 13 years, Jason has enjoyed an amazing coaching and learning experience and looks forward to making volleyball a career at Forza1!!!